Unlike in ruminants, the fat mass in a pig is deposited around the lean mass. From a practical perspective, this explains why the fat is often visible and can be easily removed.

Charcuterie products can be divided into 4 categories according to fat content (%):

To this end, in 2015, charcuterie makers signed a new collective agreement aiming to extend this 5% reduction to 12 additional categories not included in the PNNS charter.

Overall, 50% of charcuterie eaten in France contains less than 20% fat. Charcuterie accounts for 7% of our daily fat intake. It is the 4th most important source of fat in adults, (5th for children), after oils, cheese and butter.

Charcuterie is a good source of protein from a quantitative and qualitative perspective.

Charcuterie products can be divided into 3 categories according to protein content (%):

Protein content varies widely for 100g and these figures should be adapted to usual portion sizes.

During the charcuterie production process, salt plays a key role for three reasons: 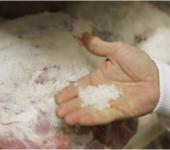 During the 60s and 70s, as refrigeration techniques evolved, less salt could be used in charcuterie, with a more delicate flavour, without impacting upon the storage time. The quantity of salt used to produce dry-cured ham has fallen by 30%.

During the 2000s, , research indicated that eating too much salt could seriously affect your health (notably by increasing hypertension). As a result charcuterie producers have reduced the salt content in their products by 10-15%, and also committed to reduce levels by a further 5% within the framework of the PNNSS.

Nowadays, even if salt content in charcuterie remains relatively high, it only accounts for 10% of our total salt consumption on average. The skill of charcuterie makers now focuses on optimising the amount of salt required to guarantee the taste and safety of these foods, and making them suitable as part of a balanced, healthy diet.

The daily reference intake (RI) for sodium on food labels is no more than 2.4g, or 6g of salt, which is around a teaspoon.

According to the French Food Safety Association (AFSSA) and The French Agency for Food, Environmental and Occupational Health & Safety (ANSES), adults should limit daily salt intake to no more than 6-8g.

When it comes to nutrition, some meals and food combinations are as great-tasting as they are sensible, as they pair charcuterie with foods with low salt content, such as melon and ham, charcuterie and potatoes, sausages and lentils or beans, or black pudding and stewed apple.

Vitamins and minerals are found naturally in charcuterie:

Content will vary according to portion size and recipes.

Black pudding is by far the greatest source of iron in foods.

• 11.5% of women aged 30-54 years and 71% of 18-29 year olds have low iron reserves (Source: v ENNS study, 2006).
• Iron from animal-based protein (heme iron) is two and a half times more easily absorbed than iron from vegetables.
• Zinc is important for cell renewal, healing and for boosting immunity.
• Selenium plays an important role in inhibiting the formation of free radicals and more generally in the body’s defence system.