Andouille tripe sausage is part and parcel of a long history dating back to the Middle Ages.

In 1393, the medieval ‘Good Wife’s Guide’ (French: Menagier de Paris), printed its recipe for Andouille. Another variant, Andouille à Jargeau (Loiret) can be traced all the way back to the Middle Ages.

Andouille seems to be a particular favourite of French Renaissance writer Rabelais, who featured the delicacy in his hugely satirical novel Pantegruel, a giant, where it is his protagonist’s favourite dish and has a starring role in La guerre des Andoyles et de Quaresmeprenant. 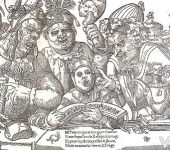 As history would have it, the ‘Andouilles’ and the Quaresmeprenant (a reference to Lent), had been at war for many years, when Pantagruel decided to put an end to the quarrel. Once alerted to the approach of Pantagruel and his troops, the Queen of Andouilles believed him to be Quaresmeprenant’s ally. She immediately launched an offensive, led by 42,000 Andouille sausages in all their splendour, armed with sharp, pointed spears.

Convinced that this was merely a ‘culinary battle’, Pantagruel rallied 161 cooks. Hidden inside a giant sow they successfully sneaked up on the Andouilles. The fighting began, and soon the battle field was strewn with dead or injured Andouille sausages. Suddenly, a huge pig with enormous wings appeared on high, and scattered mustard from the skies. This was said to be the first founding father of the Andouille race.  Seeing this vision, the Andouilles abandoned their arms and knelt down, their hands joined above their heads. The fighting ceased, and the Queen of the Andouilles realised she had made a mistake about Pantagruel. To make amends, she made a promise that she and her successors would always be his humble servant, and that every year, 78,000 royal Andouilles, destined to be served as a starter, would be presented to the giant as a gift. The very next day, six ships loaded with Andouilles were sent to Gargantua, Pantagruel’s father.  Alas, things did not go according to plan as during the journey, as a result of the mustard used to treat the deceased and dying Andouilles, all the sausages perished en route. They were subsequently buried in a place dedicated to their memory, Pavée d’Andouilles (a real place in Rabelais’ day, located by Sainte-Genevieve Hill, in Paris).

In addition to these literary references, in the 18th century, a number of andouilles appeared in a range of culinary works.

In 1767, Andouille sausages from various towns and cities across France, including Troyes, Saint-Malo, Cambrai and Auray, are mentioned in the Gazetin du Comestible, a culinary bulletin of the day.  In 1778, different andouille sausages from Brittany, including the renowned Andouille de Guémené, featured in the Almanach du Comestible, another gastronomic almanac of the time, where they are referred to as ‘the most remarkable food for their goodness in various regions.” 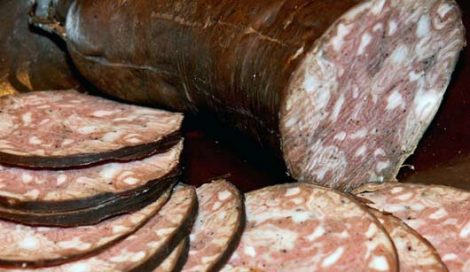 During the same period, another regional speciality, Andouille de Vire (from a town in Normandy), also made an appearance in specialised gastronomic works.

From the 19th century, the reputation of the delicacy blazed a trail beyond the outskirts of the region, and more often than not was available in Paris charcutier stalls.

Andouilles made from pork, veal, beef, game and even fish, were served poached in some of the finest Paris eateries. In 1827, French physician, René Laennec included Andouille de Guémené on a list of Breton specialities.

During the 19th century, other Breton andouilles gained recognition, notably from Cahard.

In the period between the wars, andouille from Carhaix and Gueméné, were engaged in their own small battle. The first written, detailed reference of Andouille d’Aire-sur-la-Lys appeared in 1926, in the Larousse Manager, an illustrated dictionary of household life.

Today andouille de Guémené is the worthy legacy of a rich and ancient Breton charcuterie tradition.

But the history of andouille does not end there. In 1986, andouilles de Revin, in Ardennes, originally produced around Shrove Tuesday, joined the illustrious list of andouille sausages appearing as a regional speciality in the Code de la Charcuterie.

The Art of Production

Andouilles are made from part of the animal’s intestinal tract often referred to as ‘chitterlings’ and pork offal, which may vary from recipe to recipe. Other ingredients include pork fat and pork meat. Salt, herbs, spices, wine, alcohol, liqueurs, condiments and aromatic seasonings can also be added. Andouille is made by stuffing mixture into a length of intestine or gut casings.

Tripe sausage from Guémené is made from 20-25 pig intestines, of various weights and sizes, beechwood smoked, dried and then cooked for several hours. The andouille are roughly 40cm long, 8cm in diameter and weigh 1.5kg. The outer skin is brown in colour, which gradually takes on a blackish hue further to the drying and smoking process. Slicing into the meat reveals a tantalising pattern of concentric circles of intestines.
The recipe is said to be attributed to peasant farmers from ‘Pays Pourlet’ and Cornouaille, a history region on the Brittany coast. The Fete de l’Andouille, an annual festival in honour of the delicacy, is held every 4th Sunday in August in Guémené.-sur-Scorff, to coincide with the pardon of Notre-Dame-de-la-Fosse, patron of the city, and organised by the local andouille brotherhood, the Confrerie des Goustiers de l’andouille de Guémené.

This particular Andouille hales from the Normandy town of Vire and is made essentially from pig intestines and stomach, of which at least half intestines. Meat from the throat of the pig can also be added, either with or without the rind, and limited to 5%. The intestines and stomach lining are filled in an outer skin, which can be made either from the large intestine, beef cap (or ox bung) or other natural casings. The sausage is cooked and smoked, either before or after cooking, and sometimes coloured.

This variant is made using pig’s large intestine, stomach and mesentry, with no added fat. The meat is cleaned, cut, and cured by resting in brine for several days. Natural casings are then filled with the long strips of tripe. The andouilles are then smoked, preferably over beechwood, which can take more than a month. After the salt has been removed, the andouille is cooked in boiling water. The resulting tripe sausage is 25-30cm in length and 4-6cm in diameter. Its dark, black skin is entirely natural and results from the traditional smoking process. No added colourings are permitted.
Every autumn, andouille de Vire is in the spotlight at the Etouvy Food Festival, one of the oldest culinary events in Normandy.

Cambrai is made from the pig’s large intestine or ‘chitterlings’, 1.5% salt, 3% pepper and 1% sage. The outer casing is made from the pig’s large intestine (French: baudruche). Cylindrical in shape and closed at both ends, this andouille is 30cm long, 10cm in diameter and weighs in at a hefty 1kg.
Cutting into the yellow-brown exterior reveals a pink, marbled, roughly chopped meat interior, with a distinctive spicy, salty flavour.
Andouille de Cambrai is cooked at 90°C in well-seasoned stock. The intestines are washed in hot water (30-40°C) for 2 hours, then chilled to 0°C for a 6-hour period. They are then cooked at 95° for four hours to remove the fat. These are then cut into 2-3cm strips and seasoned with salt, pepper and sage. The casings are then filled by hand in this large, stronger casing and stored chilled at 0°C - 3°C.

This andouille from northern France contains 70-80% pork meat, of which 20% pork fat, 20-30% large intestine, salt, pepper and herbs, including sage. Cylindrical in shape, it is 30cm long and 4.5-5.5cm in diameter, and weighing in at 500g.
White in appearance, it turns brown during the smoking process. There is a distinctive sage flavour to the sausage, which is particularly popular in this region, and in this respect is similar to andouille from Cambrai.
While less popular than its Cambrai cousin, andouille de l’Aire-sur-Lys is nevertheless much celebrated. Every year, on the first Sunday in September, the Andouille Festival hosts tastings throughout the day, with samples handed out to passers-by, and the ‘andouille-eating champion’ is crowned in an annual competition.

Tripe sausage from Revin contains 60% meat, 40% large intestine, salt, pepper and spices. Cylindrical in shape and slightly ‘nobbly’ on the outside, it weighs in at around 500g, is 20cm long and 6-8cm in diameter. Beige on the outside, it is pink once sliced.

Andouille from Jargeau is unusual in that it contains no offal, and is made entirely from pork shoulder and belly, and no other parts of the animal. Technically, it’s more sausage than andouille. It can also be smoked. Every year, the local brotherhood, Confrérie des Chevaliers-du-Goûte Andouille, hold a competition to crown the region’s very best andouilles.

Andouille from Brittany is made from pig’s intestines, where chitterlings account for at least 30% of the meat. Throat or pork belly, with or without rind may be added, but is limited to 5%.

100g of andouille contains much less fat than 100g of coleslaw or 100g of vegetable pie.

Andouille is also a rich source of protein. Andouille contains as much protein as meat (24.5g/100g on average), compared to 18-20g in meat.

Since the proteins are from animal sources, they are of high biological value, and also higher in essential amino acids than plant proteins which are usually lacking in one or several amino acids. They are key to various processes in the body, namely cell production, maintenance and renewal.

Andouille has a further advantage: it is only moderately high in calories (211kcal/100g).  Andouille is delicious served cold, simply served sliced.