There’s a whole world of meat pies, pork pies and delicious pastries ripe for discovery in France, and this ‘pastry charcuterie’ category (French: charcuterie patissière) has it all.  Think meat pies (French: Pâtés en croute), vol-au-vent (bouchée à la reine), cheese and ham toasties (French: croque-monsieur) and the iconic hot dog; just a few delicacies still hugely popular today, whose roots stretch surprisingly far back in time. Over the centuries, many literary and historic figures have featured these delicacies in their works.

Pies, or literally ‘meat filling with a crust’, can be traced back to a Medieval Hunting Guide (French: Livre des Details de la Chasse) written by Gace de la Bigne, chaplain to Kings Philippe V, Jean II and Charles V in the 14th century. This was the first written record, in verse, of meat encased in pastry.

In the Middle Ages, meat pies, and fish pies too, were made in myriad shapes and forms by patissiers generally of ill repute, trading on the fact that the contents were hidden from view under a pastry crust, and whose trade became regulated from 1270. 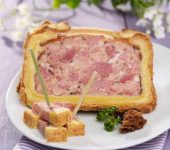 All the fillings were encased in pastry, the outer crust serving as a kind of container.

Unlike terrines, basically meatloaf or forcemeat cooked in its namesake dish, pie filling was always cooked within a pastry crust. Since the crust was rock-hard, it was totally inedible, with only the contents of the inside fit for consumption.

The art of the patissier, just like the brewer or inn-keeper at the time, was all about transforming and working with the raw ingredients. These practices inspired much fascination and interest in the Middle Ages. The patissier was the expert not only of the filling, but also the outer crust.  Pate en croute was his speciality and hero dish.

The patissier worked hidden away in his back-shop, far from the prying eyes of customers, where he boiled the meat, then chopped it finely. The raw ingredients, now unrecognisable, were then hidden under the pastry and cooked. All the ingredients were enshrouded in a veil of suspicion.

Despite the dish being shrouded in mystery, it nevertheless stood the test of time. The recipe for the filling gradually evolved over the years, and the pastry crust eventually became edible.  The pie was born.

In modern times, the recipes became more intricate and stamped with unique, regional flavour. A number of well-known, high-ranking French government officials, such as Richelieu, spawned namesake meat pies, which have remained famous until today (Richelieu pâté en croûte has liver mousse at its centre) . Meat of varying quality can be used, including game, pork, poultry, veal and foie gras. 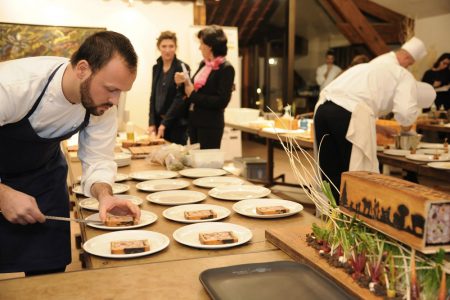 In the early 19th century, the largest and most elaborate pie took shape, named the Oreiller de la Belle Aurore; the magnificent game pie was seemingly created by personal chef to Anthelme Brillat-Savarin, famous author of ‘The Physiology of Taste’ (French: La Physiologie du Gout) and renowned gastronome. The pie was named after his mother, Claudine-Aurore Recamier.

Today, the history of the pie filling is still being written. Reimagined with a contemporary twist barely five years ago, in the skilled hands of a number of restaurateurs, pâté croûte is today one of France’s most popular charcuterie specialities.

Every year since 2009, the meat pie brotherhood, (French: Confrérie du pâté en croute) has organised the highly publicised ‘Pâté en croûte championships’, attracting professional and up-and-coming chefs, charcutiers and restaurateurs; all for the love of breathing new life into this gastronomic legacy dating back to Medieval times.

Friand, meaning ‘dainty pastry’, stems from Old French friant and past participle of frire, to fry or roast, satisfy the palate and appetising. The term dates as far back as the 13th century and was officially adopted in 1906, though gradually started to make an appearance in French literature before this date in renowned works by literary greats such as Emile Zola and Colette.

“She eats while watching the people passing by in the street. After having devoured three friands, she orders a fourth. She could not quite stretch to a fifth”, writes Emile Zola, in Russian monthly magazine The Messenger of Europe (French: Le Messager de l’Europe) May 1875. 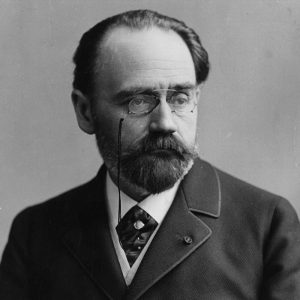 In the following century, Colette also referred to the delicacy in a passage in The Rainy Moon (French: La Lune de Pluie):

“We took our bicycles, bread filled with butter and sardines, two sausage friands purchased at a charcutier close to La Muette and some apples, all tied up with a gourd full of white wine…”

And on which fair wind flew the vol-au-vent?

Little is known of the exact timing or circumstances surrounding its inception.

Perfected in the early 19th century by Antonin Carême – renowned chef, patissier and culinary writer celebrated across Europe – who replaced the heavier style of pastry with a lighter, puff style, which was so light in fact that it was said to ‘fly off in the wind straight from the oven’.  Anglophiles the world over have coined the French term vol-au-vent, which translates – we now understand – to ‘fly off in the wind’.

Marie Leczinska, wife of Louis XV, was responsible for the creation of the recipe for Queen’s dainty bites (Bouchée à la reine.)  Her appetite being the subject of much discussion in literary works of the time, the descendent of the illustrious Polish dynasty was famed to have spawned the idea of creating individual, dainty vol-au-vents, and was honoured with the name.

Soon to celebrate its 100th anniversary, this famous cheese and ham toastie, quite literally ‘Gentleman’s sandwich’, (croquer, to crunch and Monsieur, sir) was first served in a French café on Boulevard des Capucines in Paris.  Marcel Proust featured the savoury delicacy in his famous book ‘In the Shadow of Young Girls in Flower’ (French: A l’ombre des jeunes filles en fleur):

“On leaving the concert, and coming back along the road to the hotel, my grandmother and I stopped to chat briefly with Mme de Villeparisis who informed us she had ordered ‘croque-monsieur’ and ‘creamed eggs’ for us at the Hotel.”

A brief history of the Hot Dog

An American speciality be that as it may, the much loved snack is of German invention (aka the frankfurter).

The hot dog made its first appearance in 1904, at a fair held in Louisiana, during which a Bavarian stallholder, Anton Feuchtwanger, assisted by his baker brother-in-law, created the hot dog, based on the ingenious idea of wrapping a hot sausage in a piece of bread to transport it across the fair without burnt fingers.

But what’s in the name? Back in the 19th century, German immigrants referred to recipes containing sausages as ‘dogs’ given their similarity to dachshunds, also fondly known as ‘sausage dogs’. And so the term ‘hot dog’ was born, as the story goes…

Charcuterie patissière is the category of prepared meat products wrapped in a pastry crust, then cooked in the oven. There are in fact two groups of charcuterie patisserie, each determined by whether the meat was cooked or raw when covered in pastry.

Luckily for their fans, these delicacies can be found the length and breadth of France. 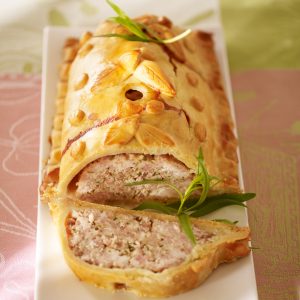 The term pâté en croûte refers to meat or fish filling or ‘galantine’, prepared in a jelly coating, usually in a mould and a pastry crust aka the meat pie.

Various lean meats, including pork, veal, poultry and even game can be used to make a pie. The filling is usually fine-textured, then covered in pastry and cooked in the oven.

While pies tend to be served once cooled and removed from the dish, they can also be eaten piping hot from the oven.

When the pie is cooked without a lid, the filling must not account for more than 45% of the total weight; with a lid, it must not exceed 50%. A variation on the classic pie,  Easter pie (pâté en croûte de Pâques) contains hard boiled eggs within the filling.

There is nothing more tasty and nutritionally balanced for lunch than a slice of delicious meat pie or croque-monsieur served with a crunchy salad with a white wine and lemon vinaigrette, or for a family dinner, bouchée à la reine accompanied by cumin-scented courgettes.  Given the low calorie content of the vegetables, overall this is a perfectly balanced meal which should be considered within the context of the whole meal or even an entire day’s intake.

A firm favourite for children and grown-ups alike, charcuterie-patisserie for lunchtimes are an important part of your daily intake for a long afternoon at school or at the office.

The perfect blend of energy and flavour guaranteed.