Back in the Middle Ages, launching the Christmas festivities on Christmas Eve with a simple hot milk porridge was an important tradition, which is believed to be a precursor of the boudin blanc (aka white pudding or white sausage).

Unlike boudin noir, the true recipe for boudin blanc is much more recent, and only dates back to the 17th century.

In her great work The Housewife (French: La maitresse de la maison),  Baronne de Staffe wrote in 1892 that after that time, to simplify mealtimes, a chef had come up with the genius idea of serving the porridge in a casing, and tweaked the traditional recipe in the process. The modern boudin blanc was born… 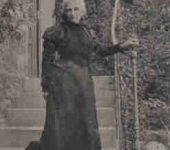 In its current form, Boudin blanc from le Havre in northern France is not dissimilar to the ‘milk porridge’ of our ancestors. Legend has it that boudin blanc was the ingenious work of monks, so that they were able to eat a sausage-shaped delicacy only made from milk on Fridays.

Traditionally, boudin blanc was a delicacy associated with special occasions, which explains - even today - the special ingredients used.

Boudin blanc, a cooked prepared meat, is a smooth-textured, very pale paste of white meat, from lean pork, poultry or veal, all encased in a skin made from pig’s small intestine. 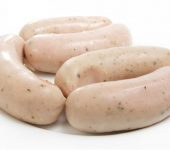 The mixture is flavoured with a whole host of other ingredients including carrots, shallots, bouquet garni of thyme, bay leaf, parsley and cloves, and sometimes even vanilla, orange blossom or cinnamon.  Alcohol* or truffles can also be added to further enhance the flavour, or even goose or duck foie gras. Truffle will subtly perfume the sausage and impart its distinctive flavour.

*Alcohol can be damaging to your health. Please drink responsibly.

Rethel Boudin blanc, which has been awarded coveted protected geographical status (PGI), is made exclusively from pork, milk and fresh eggs, and is starch free. The result is an unctuous, tasty sausage. Well-known for its boudin production, in April every year, the town of Rethel holds a fair in honour of the boudin blanc.

Boudin blanc from Havres in northern France is a Normandy speciality, the origins of which go way back. This particular version does not come in a casing, and is composed entirely of pig’s fat, milk, whole eggs, breadcrumbs, starch and rice flour. Once the ingredients are blended, the filing is pale yellow in colour. Havrais boudin may contain up to 8-9% starch, and this must be indicated on the packaging.

The Toulouse variant, true to its regional roots, contains 20% duck or goose liver, and its origins date back several centuries.

Catalan boudin blanc is starch-free and eggs are a key component. It is easily recognised by its distinctive herby flavour.

Malsat or ‘boudin blanc de pays’ is a speciality from South West France, made from roughly equal parts of pork belly and egg panade (eggs mix with starch and liquid). The meat is then stuffed in natural casing from cattle large intestine and often seasoned with herbs.

This variant from Castre is similar in flavour and composition to Malsat. Its real point of difference however is that it is the only boudin to be encased in caul and either shallow-fried or oven-baked.

Truffle is the extra special ingredient added to this Boudin blanc, from the tuber melanosporum family, and specifically the black or Perigord truffle and tuber brumale (Muscat or winter truffle). The boudin must contain at least 3% truffle to be sold under this name. If the quantity falls below 3%, the truffle content must be specified on the label i.e. ‘x% truffle’ and must be no less than 1%.

Boudin blanc with mushrooms, or a single type of mushroom, must contain at least 1% mushrooms or specify the mushroom variety, calculated in rehydrated form when added. If the mushroom variety is specified on the packaging, it means this mushroom has been used exclusively to make the boudin.

The Richelieu boudin is rounded in shape. Wrapped in caul, it is decorated with truffle, firm in consistency and unusually is actually two sausages linked together. It is very smooth and creamy with a distinctive truffle perfume.

Coudenou is made from a 50/50 blend of meat rind and egg panade, encased in cow or pig casings and then poached. Coudenou is known for its crunchy texture which is particularly popular.