The term rillettes comes from the French word rille, from the old French reille, meaning a plank or a ruler.

Rillettes first made their appearance in 1480, in a document citing ‘rilles and pig’s ears’. This referred to a pork cut, possibly a long piece of meat, or cut into strips. Rabelais, in his third work Tiers Livre in 1546, and Guillaume Bouchet, in Les Serées, used the term to describe cooked pieces of pork that were offered to neighbours as a delicious meaty snack. 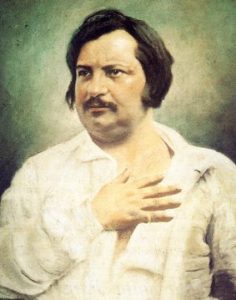 Rilles or rillettes were for many years the preserve of home cooking, initially intended as a way to preserve pork meat, and usually a twice-yearly event after the pig was slaughtered. This method of preparation formed the basis for many varied and local recipes practised throughout the Loire Valley, from Sarthe to Fontenay-le-Comte, via Saumur and Ancenis. Back in 1836, Balzac paid tribute to the delicacy through his protagonist Félix de Vandenesse in his novel ‘Lily of the Valley’ (French: Le Lys dans la Vallee): “the famous rillettes and rillons from Tours were an essential part of the meal we took at midday, between breakfast in the morning and dinner at home.” He was from Tours after all.

In the early 20th century, the popularity of pork rillettes from Tours waned, largely to the benefit of their Mans counterpart, whose reputation was already recorded in the 1869 charcuterie treaty, which stated: “they have long since enjoyed…a certain reputation.”

The rise of the railroads accelerated their growth, especially in the Paris region.

Rillettes started to feature on Paris menus towards the end of the 19th century. Today, this succulent delicacy is sold in small pots (70% of production is sold this way), at deli counters or in cans.

Served cold and ready to eat and practical, rillettes are easy to spread and make a delicious starter with toast or rustic bread, or as a filling for a tasty sandwich, spiced up with crunchy gherkins. There is a leaning towards a lighter, low-fat version of rillettes, which is much more moist and easier to spread.

Rillettes come in a wide range of options, such as frittons, grillons, grattons, chichons or graisserons, and aside from the usual base ingredient of pork or goose, can also be prepared with duck, poultry, rabbit or game.

Rillettes are generally produced from pork slowly cooked in their own fat, but can also be made with goose or duck. The selected cuts must be sufficiently flavoursome and mature to withstand lengthy cooking. Some producers are fiercely purist and only season with salt and pepper, while others introduce subtle blends of spices, herbs and condiments. 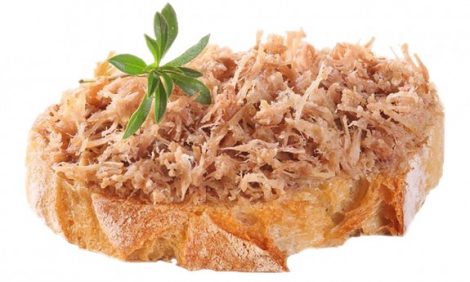 Wine and alcohol may also be added. The meat is first seared in a carefully controlled process, then slow-cooked in fat for 4 to 10 hours depending on the recipe, until the meat is caramelised and so tender that it begins to fall apart, rather like pulled pork. As the meat fibres break down in the heat, the result is a succulent, flavour-packed consistency. The meat is then carefully stirred, incorporating the fat, and transferred to a pot. The rillettes may then be protected with a layer of fat leftover from the cooking process; lard can also be used.

Rillettes are sold fresh, in pots or over the counter, and can also be sold pasteurised or tinned.

The two essentials for cooking successful rillettes is mastering the crucial searing stage and mixing the ingredients with meticulous care.

Specialists have devoted their technical know-how to enhance age-old tradition. And to help you make up your own mind, there’s only one way to find out: try them for yourself!

These rillettes are pale in colour, tinged with grey, brown, gold or even pink.
Small, lean cubes of pork are seared, before being slowly cooked in their own fat, at medium, steady temperature. The meat is lovingly cooked for at least 5 hours. These rillettes are full of juicy meat morsels.

The meat in these rillettes is dark in colour. Lean pork meat is cut into strips, then cooked in its own fat for at least 4 hours. Rillettes from Tour are regionally protected with PGI status.

This delicacy is made with slightly smoky meat.

This particular variant is prepared with diced pork meat and pork fat gently cooked over a low flame. There are other similar recipes from Perigord and Touraine.

These are made from a roughly equal mixture of hard fat in cubes and lean pork cuts (shoulder and blade), which may be cured. The mixture is then cooked in an open container before being drained. This variant also exists in Lyon.

A south-west speciality, these are made from solid meat morsels resulting from melting the fat, together with small chunks of pig’s head meat, kidneys and heat cooked in pork fat.

A speciality from the South-West (Basque country, from les Landes and Bearn), where minced pork fat and lean pork, goose or duck are cooked in fat to make a confit. Garlic is a frequent addition.

A speciality from Tours in the Loire Valley, small pieces of pork are prepared in the same way as rillettes. By not cooking the meat quite as long, it retains its shape with the delicious flavours of confit meat. In nearby Angers these are known as rillauds.

The most famous exponents are rillettes from Le Mans, la Sarthe and Tours.

Rillettes contain 40% fat, including 59% unsaturated fats* of which 46.7% are monounsaturates, 12.5% polyunsaturates (omega 3 and 6 ), and only 41% saturated fats. The fat content in rillettes is slowly diminishing. It is rich in animal protein (15%), of high biological value given the high content of essential amino acids.

Rillettes are low in cholesterol: 76mg/100g

It is worth noting that the average diet contains some 500mg of cholesterol, of which 50% is absorbed and that only 20% of cholesterol in the blood comes from our food (the rest being endogenous).

Rillettes, like other charcuterie products, contain group B vitamins.