In Ancient times, the famous Greek poet Homer would sometimes make reference to the delicacy. According to Homer, Achilles’ mother Thetis prepared a dish of beef tripe for her son after having plunged him in the river Styx to make him invincible. Some years later, Greek writer and poet, Athenée, also mentioned a dish made from ‘animal intestines’.

It is alleged that some of the great warriors of history also savoured the delights of tripe, and William the Conquerer is said to have enjoyed them with apple juice no less. Each to his own! A number of celebrated French authors were also able unable to resist its appeal. So it was that Rabelais’ hero Garguantua came into being, after his mother Gargamelle consumed a plate of gaudebillaux, or the tripe of fattened calves. 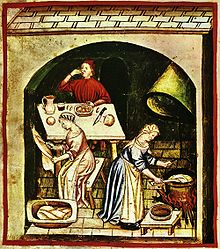 According to etymologists, the term trippe (albeit with double ‘p’) appeared for the first time in 1243. It comes from the Italian trippa, derived from the Arabic.

A highly prized delicacy, tripe was highly regulated for a great many years. In the Middle Ages, the tripe ‘corporation’ was run by six families. They alone had the right to make tripe, which they would then sell on to peddlers. In 1738, Louis XV’s chief of police signed an order to regulate the profession of  ‘tripe cook’.

It was not until the 19th century that, according to legend, the elusive Sidoine Benoit’s famous recipe for ‘tripes à la mode de Caen’ became known all over Paris.

In 1839, Pharamond, a young Normand from Caen, settled in Paris and opened his namesake restaurant in rue de la Grand-Truanderie, near Les Halles, a joint venture with friend and fellow Normand Heutte. Their speciality, ‘tripes à la mode de Caen,’ simmered round the clock in huge copper cauldrons.

The origins of tripous or tripoux, which are small tied parcels of veal or lamb tripe – another famous way of preparing tripe – are uncertain. Some say they were commonly found in the north of the region of Aveyron. Others say they originated from Cantal or the Ségala region (south-west or Massif Central).

Tripe is part of the edible stomach lining usually from cattle, veal, sheep or pig, cooked in a jelly seasoned with other parts of the stomach and possibly boned feet. Vegetables, herbs and spices, stock, wine or cider* are then added. 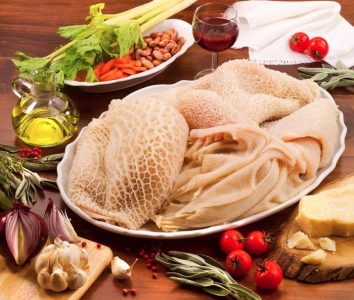 Tripous are small parcels of sheep or veal tripe, fashioned from either dressed or stuffed rumen, intestines and small pieces of rumen seasoned with salt, pepper, nutmeg and persillade, a parsley seasoning made from chopped parsley, garlic and onion. Once stuffed, the rumens are held together with a fine natural casing and then stitched or tied. The parcels are then cooked very slowly in a white wine sauce*, with a bouquet garni and chopped vegetables. Voila, from tripe to tripous…

Tripe in all its forms

Fresh at the deli counter, on-shelf (sliced and vacuum-packed, or fresh) or preserved (often in glass jars), there are many variations of this healthy delicacy, with something for everyone.

Perhaps the most famous of all tripe recipes is made from all four chambers of cow stomach and calves’ feet left to simmer in a vegetable broth of leeks, finely-chopped onions, carrot, garlic, thyme, laurel, parsley and salt and pepper, and sometimes lifted with cider and a glass of Calvados.*

A speciality of Ferté-Macé in Normandy, this regional dish is also made from all four chambers of cow stomach and feet. The delicacies are sometimes rolled into small parcels and thread on skewers.
Other famous examples from the region are tripes de Coutances, where tripe is cooked in cream, then rolled in a double layer of fat and shaped into parcels; tripes d’Authon-du-Perche, served in layers with bacon, and simmered in cider* with carrots and onions; from Saint-Malo or Pont-l’Abbe, where cow or veal feet, together with sheep and cow rumen are cooked with chunks of salt belly of pork (petit salé), shallots and onions; de Vannes, cooked with veal feet, onions, carrots, leeks and cider*, and d’Angouleme - rumen, omasum and veal feet, cooked in white wine* with tomatoes, garlic, studded onions and shallots.

Northern France, not to be left out, has its own tripe speciality too

The town of Cambrai is indeed well-known for its tripe, which consists of cow rumen and feet, seasoned with garlic and thyme and simmered in cider and white wine*. According to local custom, the dish is traditionally served with chips.

South of the Loire, tripe recipes take on an all-round sunnier appeal…

This local delicacy is prepared from lamb and veal rumen and/or pig’s intestine and trotters. The ingredients are then rolled and tied using casings, string or even sewn. The parcels are hugely versatile and can also be stuffed according to your every whim.

This speciality dish from Marseilles is prepared with veal stomach and feet, delicately seasoned and served in a tomato-based sauce.

The Lyon version is a blend of cow’s stomach lining, and sometimes veal, served in a tomato and white wine sauce (or alcohol*).
In Gascony, veal tripe is prepared in goose fat, while in Roussillon, the preference is for a white, creamy blanquette sauce.

In the South of France, sheep tripe is often a local favourite. In Provence for example, tripe is prepared in white wine* and garlic and sometimes sautéed. In the Quercy and Albigeois, tripe is cooked in saffron – in keeping with the medieval recipe for yellow tripe (tripes au jaune). In Olargues in the Herault, a bygone speciality is still popular today: tripe prepared from young castrated goat.

These recipes are prepared with beef stomach and/or pig, and sometimes rind, all enhanced with tomato sauce and sometimes typical Provencal vegetables.

From the Auvergne region, tripe is prepared with cow’s stomach lining, together with cow and/or pig feet, and/or veal, and possibly rind. The dish can be seasoned with tomatoes.

This is a recipe for tripous d’Espalion (in the Aveyron), prepared using sheep stomach cut into long strips, that are then rolled and stuffed with ham, garlic, parsley and herbs. The tripe is then cooked in broth or a veal and white wine* stock.

Across the length and breadth of France, there are many, ancient recipes for tripe.

A number of associations oversee production methods and are devoted to promoting the dish, including the Confrérie de la Gastronomie Normande de la Tripière d’Or, which every year organises France’s national tripe à la mode de Caen competition, the third weekend in October, and the Confrérie des fins gourmets de Longny with its national « Best Tripe dish » on 1st May.

Other organisations devoted to their cause include the Academie des Tripous in Tours and the Confrerie de proselytes tripaliens in Montpellier.

Some dishes, such as tripes à la mode de Caen and tripous d’Auvergne have seen their reputation span far and beyond their birthplace, and can in fact be prepared in any region of France as long as the recipe is carefully followed.

Certain tripe dishes benefit from quality designations such as authentiques, veritables traditionelles and à l’ancienne. All these quality terms are indicated on the packaging and are defined the Charcuterie best practice guide (French: Code des Usages de la Charcuterie):

Authentiques or veritables followed by a geographical reference (name of a town, department, region or locality) can be used as long as the tripes are produced in the adjoining department and cantons.

Traditionnel or any reference to ‘tradition’ may be used as long as the tripes are free from additives and do not contain anything but natural flavourings and those developed during their preparation.

A l’ancienne, comme autrefois or any other indication meaning ‘in the past’ can be associated with the tripe as long as it meets the conditions of traditional products and that the raw materials have not been subjected to any other process other than refrigeration.

Tripe must be cooked for at least 18 hours.

*Alcohol can be damaging to your health. Please drink responsibly.

Contrary to public opinion, discerning foodies and the health conscious alike will fiercely contend that tripe, when eaten in moderation, is an important element as part of a healthy diet. They are in fact often recommended as part of a calorie-controlled diet.