The first mention of andouillette can be traced back to the Middle Ages.  The name, meaning small andouille, a kind of tripe sausage, derives from its older sibling, which is described as ‘a charcuterie recipe made from animal intestines in which other intestines are stuffed.’

The original recipe for andouillette is not entirely clear, and can sometimes be made from veal and sometimes pork.

The earliest written trace of Andouillette de Troyes, the regional delicacy from Troyes in Champagne, dates back to 1560, when the royal army attempted to seize the town from the Catholic League. Led entirely by their culinary instincts, instead of focusing on the conflict in hand, the soldiers took full advantage of their stay to peruse the local specialist tripe shops in a quest to track down the famous andouillette sausages. Meanwhile the league took them by surprise and ceremoniously ousted them from the village. From this day forwards, Andouillettes from Troyes would enter the history books. 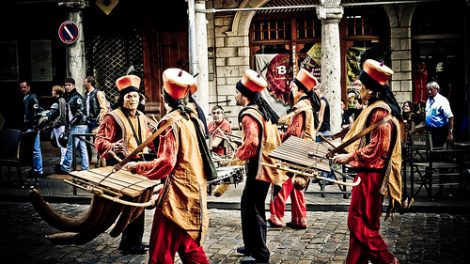 Andouillette sausages have come a long way over the years.

According to the Dictionnaire des Aliments, published in 1750, andouillette was made from chopped veal and bacon, mixed with egg yolks and rolled into an oval shape. In 1771, the Dictionnaire de Trevoux set out instructions for veal meat or fish balls rolled and shaped into ‘small andouilles’. In 1815, the Perfect Charcutier published the recipe for ‘Beef Andouillettes’, made with slices of beef, stuffed and rolled ‘to make andouillettes’.

It wasn’t until some point around 1830-1840 that the andouillette officially became a ‘small andouille’ despite at the time not being made exclusively from pork, as is the case today.  Back in 1855, a certain Lombard presented andouillette de Troyes as a product made from calf’s ruffle (part of the intestine) and calf’s udder, the mixture then stuffed into casings cured in ‘flavoured vinegar diluted in water’ and cooked in white wine stock. Thirty years later, Berthoud offered the following definition: a mixture of calf’s ruffle and pork chitterlings. In 1864, Heuzé stated that andouillettes de Troyes were only made from pork meat. Slowly but surely, production from pure pork took hold, though other regions retained the veal and pork version.

These speciality tripe sausages are made by blending or mixing raw materials made from pork and pork intestine, stuffing the mixture (by hand or by machine) into a natural gut casing made from pork intestine and cooking. The only additional ingredients permitted are salt, spices, condiments and herbs. 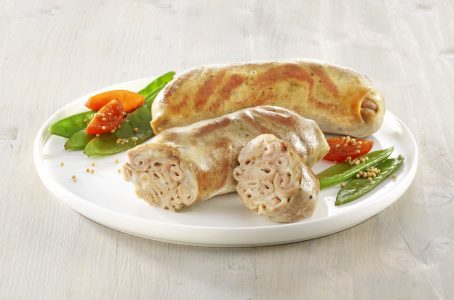 These elements must account for 75% of the net mass of the commercialised product.

These regional delicacies are sold in portions of around 10-15cm in length, and may be coated in breadcrumbs or lard.

Generous and deliciously rich, this dish from Troyes has been shaped by regional tradition at its purest and based on a fiercely guarded secret requiring honed techniques. Chitterlings are carefully sliced lengthwise, then combined and stuffed into natural casings made from pig intestines. Traditionally cooked for five hours in a meticulously seasoned vegetable broth, the recipe must adhere to the following proportions: 2/3 chitterlings and 1/3 offal (chitterlings must make up no less than 50% of the ingredients).

It takes 3kg of raw ingredients to produce 1kg of andouillette from Troyes. The uncooked mixture must be meticulously stuffed by hand into only natural casings. To qualify for the ‘veritable andouillette de Troyes’ label, the product must be produced in the Aube region, in Champagne-Ardennes.

The Lyon variant is traditionally created from calf’s ruffle, or a mixture of calf’s ruffle and pig’s stomach. This ancient recipe, closely-guarded by its fabricants in the region of Lyon, has been slightly modified to reflect evolving legislation safeguarding food. The blend of pork and veal still remains, while calf’s ruffle has been substituted with calf paunch (tripe). This regional delicacy traditionally enjoyed in local bistros known as ‘bouchons lyonnais’ has now made its name much further afield.

Jargeau is made from pre-cooked pork chitterlings and lean pork cuts, with a high meat content.

Andouillette from Rouen is made from equal parts of pig intestines and calf digestive tract.

In Burgundy, andouillette tripe sausage is made from pure pork, and seasoned with white wine, shallots, garlic and mustard.

In Provence the recipe is based on pork chitterlings, paunch and throat with rind.

The Dordogne variant is based on pork chitterlings, stomach and throat with rind.

To discover all these wonderful andouillette variations, nothing beats taking off for an autumn break to the French town of Alençon, which hosts France’s annual ‘Best Andouillette’ competition to seek out the very finest examples, or why not join the friendly society created some twenty years ago to promote the delicacy, the Association Amicale des Amateurs d’Andouillette Authentique - that’s A.A.A.A.A., for short. The original recipe dates back to Troye tradition, and a pure pork andouillette lovingly prepared since the dawn of time by hand using only the purest ingredients. And top tip from representatives of the association, always check the andouillette is moist with as little fat as possible.

100g of andouillette contains much less fat than 100g of coleslaw or 100g of vegetable pie.

Andouillette is also an important source of protein, containing as much protein as meat – 24.5g/100g on average, while meat only contains 18-20g.

Since the proteins are from animal sources, they are of high biological value, and also higher in essential amino acids than plant proteins which are usually lacking in one or several amino acids. They are key to various processes in the body, namely cell production, maintenance and renewal.

Andouillette has a further advantage, it is only moderately high in calories (222kcal/100g).

No added fat is needed when cooking Andouillette, which is quite delicious simply grilled.