No-one will remember that the Suidae family of pigs, aka the very first of their kind, walked the earth in the first tertiary period, some 50 million years before our time. And yet we have much to thank this first breed, since without them, the domestic pig, distant ancestor of the wild boar, would never have made such a significant contribution to French gastronomy. And according to history, that would be Gaul gastronomy before being adopted by the French.

It was our ancestors the Gauls, the very first inventors of ham, who were responsible for making this speciality so popular today, emulated by so many in fact that its renown is generally rarely associated with its French origins. Such was their talent at curing, smoking and preserving pig meat in oil to prevent spoilage, that Germanic people, Romans and Iberians alike all self-appropriated the idea, adapting it to their own particular region.

The ‘noble’, premium parts of the pig have always played an important role. 300 years later, the Pax Romana (Roman peace treaty) promoted the transfer of knowledge and know-how between Latin charcutiers and Gaul breeders. In the Middle Ages, ham came to symbolise abundance and opulence, and its geographical reach spread far and wide across Europe, forming the cornerstone of preserved food in rural diets. Ham can even be spotted in a number of murals and stained-glass works in such iconic locations as Notre Dame Cathedral in Paris, the Basilica of Saint-Denis, Paris, and Parma Baptistery in Italy.

Mentions of cooked ham in various written works gradually multiplied. Back in the 14th century for example, a recipe for cooked ham was published in a home economics treaty. Four centuries later, in 1793, the Tableau du Maximum, an official document that fixed the maximum price of food items, clearly stated that cooked ham was sold in and around Paris. In 1869, famous French chef and pastry-chef Jules Goueffé also described ‘Paris ham’ (French: jambon de Paris). According to this much revered source, this was an ‘ordinary ham’, cured, boiled, deboned, and placed in a terrine ‘rind-side down’ and chilled under a press. He recommended this should be served with a jelly or on a serviette garnished with sprigs of parsley.

Ham is described in myriad ways. For some, jambon de Paris comes without jelly, and is boned, rolled and covered in a thick coating of fat and rind. Equally it can be perfectly cylindrical in shape, boned and retaining the rind. It is true to say that at the time, jambon de Paris described cooked ham that was a popular food.

Production is strictly regulated, and only ham from the rear part of the pig can be used in the preparation of cooked ham, as stipulated in the industry code of best practice (French: Code des Usages).

Cooked ham or jambon blanc (white ham), is simply put, salted ham. The salty character comes from soaking in brine. How the ham is cooked is also important. It can be steamed, braised, ‘au torchon’ which means wrapped in cloth and cooked, on or off the bone, or cooked in a broth. And so ham comes in multiple forms, from Paris, York, Prague and on the bone. It can also be categorised according to the way it is prepared. 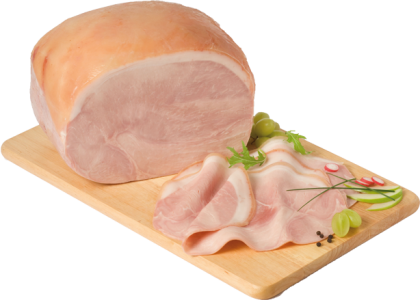 Cooked ham may contain other ingredients such as herbs and spices, wine, alcohol, liqueurs, sugars and condiments, depending on the recipe, and the category of additives (which again are strictly regulated). The ham is sold with or without rind, and the outer layer of fat must not exceed 4mm on average. The basic ingredient is fresh ham, often referred to in France as 4 D, which refers to the four French terms: ‘découenné, dégraissé, désossé, dénervé’, meaning to remove the rind, fat, bone and nerves.

The Code des Usages de la Charcuterie is a technical code of practice governing the production of charcuterie, which defines the main characteristics the products must display in order to be sold as such.  The charter is the result of extensive consultation with and input from leading and artisan producers, and the Technical centre for charcuterie and deli meats (French: Centre Technique de la Salaison, de la Charcuterie, des Conserves de Viande). It is validated by the French Authorities, via the Directorate General for Competition Policy, Consumer affairs and Fraud Control (DGCCRF). This way, the code of practice guarantees consumer safety and ensures products are not mis-sold.

York ham is free from polyposphates and contains less than 1% sugar. It accounts for more than 80% of France’s ham production.

‘Prague ham’ is a small variant on the bone, slightly salted, smoked and often used to make ham pie or other specialities. Despite its name, it is made in France.

This torchon ham can be boiled or produced à l’ancienne. Cylindrical in shape, it is sold off the bone, with or without rind and fat.

This ‘superior’ ham can be prepared in two ways, either with or without rind and fat. This particular category is governed by a French industry standard (NF) which determines protein content and strictly limits the authorised additives.

CThis is a premium quality ham which has been slow-cooked.
Ham sold under the braised designation (braisé) must be braised, ie. cooked by simmering very slowly in a closed vessel.

This well-known ham is generally rectangular in shape, a combination of white, pale pink and dark pink in colour, and varies from 5 to 5.5kg in weight. The meat is in fact a boned pig’s thigh, which has been salted and placed in a rectangular mould, then cooked in a herby broth containing juniper, coriander, cloves and bouquet garni.
In the olden days, geographical designations would indicate where the ham was produced. Gradually, its reputation is no longer based on geography alone, and today the name of the product refers instead to a very specific recipe.

Cooked ham has many nutritional benefits

Rich in protein, low in calories and in fat, cooked ham more than deserves its place in daily diets for the young and old alike, and sportsmen too, and also regular features in a number of specialist diets.

Cooked ham is a rich source of protein. Given that the protein is from animal sources, it is of high biological value, and key to various bodily functions, namely cell production, maintenance and renewal.

A 50g slice of cooked ham (average weight), will provide 11-13% of our dietary reference intake in protein* for men and 15-17% for women. 50g of premium cooked ham contains 10g of protein.

It’s therefore a great choice for anyone following a low-calorie or calorie-controlled diet, without skimping on proteins.

Cooked ham is also low-fat. With the rind and fat removed, cooked ham contains only 2-3g of fat per 100g of meat.  It is therefore as low-fat as poultry-based charcuterie such as turkey ham.

Even if enjoyed in all its full glory, fat and all, cooked ham with rind contains no more than 10% fat.

Cooked ham is a rich source of vitamins too, essentially B vitamins.

Another key nutritional attribute, given its flavour and texture, it is one of the first foods given to children after milk, and is a huge favourite for children.